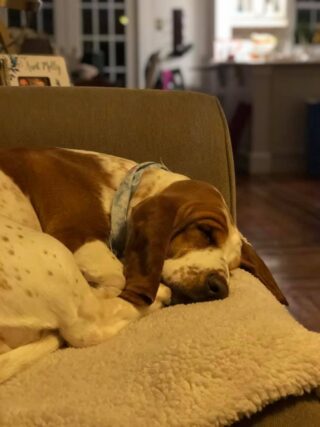 My Lottie looks and smells so much better post rescue! Helen is wonderful and offered her an open invitation to come visit any time 😉 Thank you!

I have been going to

I have been going to Helen and her staff for many years with a number to dogs. They are wonderful. I trust them with our companions explicitly. They are kind and caring to all the animals in their care. Plus the quality of the wash, cut and grooming is excellent. Also, they have helped many rescues by grooming animals in need. My dogs, my husband and I love this place!

As a proud mama of

As a proud mama of a springer spaniel puppy…..it was finally time to get Chipper a haircut before he raced around on the beach for the summer.
Chipper and I were greeted with his name on the wipe board as soon as we walked in the door. I felt like my little kid was going to kindergarten or something! Adorable. Helen, the owner, clearly loves all of the dogs that come in, and Chip took a liking to her immediately.

Chip settled into a kennel, and when I came back three hours later, he was perfectly groomed to exactly the specs I had given them, clean, happy, and with a cute little bandana tied around his neck. He even got a report card, a “B”….not bad for a puppys first grooming.

Very neat and clean, great staff, and a small retail area in front. Chip is now pre-booked for his next appointment, and I wouldn’t dream of taking him anywhere else.

I now have first hand

I now have first hand knowledge on why this little groomer has received 5 stars from so many people. I walked my 2 pups up to the front door and saw their names written on their dry erase board welcoming them 🙂 As soon as I walked in with the dogs I was greeted by several of the employees and the owner. Since I was a new client I filled out the paperwork for the dogs as some of the staff were gushing over my babies lol. The owner was very good about asking me about the usual way I have them groomed, whether they had allergies or anything else that they should be made aware of. I liked the time they took to get to know my dogs. I told them that I had a time crunch since I had a doctors appointment that day and asked if they could have them done within 3 hour and they told me they would. They called an entire hour earlier than I expected them to finish and they gave the girls the exact haircut that I asked for. The attention to detail is very impressive. They even sent the pups home with a report card. I look forward to taking them back when they need to be groomed again. I would highly recommend Scissors & Suds to anyone looking for an awesome groomer 🙂

We have been bringing our

We have been bringing our Bichon, Alex for 12 yrs; Helen and her staff are fabulous. They deal w/ so many diverse personalities (pets / pet owners) yet always find a way to be so very congenial regardless of the premise. Alex was somewhat reserved almost withdrawn intially yet Helen worked with her until Alex peeked and reached her comfort level. Quinn, our newest Terrier mix is a completely different mind-set and again Helen has worked her magic to welcome Quinn equipped w/ her manic personality. Scissors and Suds is without a doubt a remarkable pet spa.

I love Scissors and Suds.

I love Scissors and Suds. I have been taking my pets there since she opened and would never trust anyone else. The staff is awesome. Helen is amazing with all the animals and treats them as if they like everyone of them are her own.

All I have to say

All I have to say is I would not take my dog to anybody else. Helen and her crew are the real deal….when I leave there I know she will treat daisy as I would…. I just wanna say thank you Helen and staff for making me and daisy feel like we are as part of your doggy family. It takes a special person to do what you do and thank you for treating all our animals with nothing but love……

Hi Folks, I would like to thank the S&S team for taking such good care of Ziggy. He is a 12 year old half St Bernard half border collie and 90 lbs. His fur has two layers. One that is long and the other is mat like and thick. He cant stand for long periods of time to get shaved or he is pain the following day. The S&S team took excellent care for him. These guys truly care about the dogs and go the extra mile. We really appreciate it.

I’m not gonna lie …I

I’m not gonna lie …
I hate waking up at 6 30am to get my Samoyed Nicko to his 8 am Friday morning appointments at S&S.
With that said I wouldn’t take him anywhere else!
Nicko has a massive amount of white fluffy hair that matts and tangles very easily.
Rarely will he sit for anyone in our house to brush him but somehow he comes out of the shop looking like we brush him reguerly and with no hassle…..don’t know how they do it????! Would hate to see how he would look with out S&S .
I am very happy that they are such great animal loving groomers who take great care of our Nicko.

My mini aussiedoodle just had

My mini aussiedoodle just had his first haircut with S&S and I could not be more happy with the results!

Not only does my pup look amazing but he was also very happy; which has not been the case when I have picked him up from other grooming salons!

They gave me a full report on his grooming appointment and all the employees were absolutely lovely!

I can’t wait to go back in a few months for our next trim! 🙂

I Highly Recommend this Salon!

Scissors & Suds is the

Scissors & Suds is the best Groomer! They took fantastic care of my dog Daisy. They were fabulous at accommodating her as she got older and had issues with arthritis in her back legs. Worth it at twice the price!!

I bring my Chihuahua here

I bring my Chihuahua here for his nails to be clipped, we now live in Ocean City and I will continue to bring him here. He’s 15 and nobody could treat him better or with more compassion than Helen and her crew. I highly recommend them for your dog grooming needs of any kind.

MY WESTIE “ROSCOE” IS A

MY WESTIE “ROSCOE” IS A GOOD BOY BUT HE NEVER LIKED GETTING A HAIRCUT, THE GROOMER WE USED FOR 3 YRS. FINALLY QUIT CAUSE HE WAS SO BAD, I HERD ABOUT YOUR PLACE FROM LORRY YOUNG, YOU GUYS DID SUCH A GOOD JOB ON HIM! I’LL BE BACK FOR SHURR! GOOD PLACE & ROSCOE IS A HANDSOME BOY AGAIN!!

We took our dog Isaac

We took our dog Isaac and couldn’t be more happy! Not only was the price for the service unbeatable, the staff was exceptional! Couldn’t be any more happy with the services and treatment. And on top of it, sent us home with a personalized Xmas gift! So thoughtful! Thank you scissors n suds!

We have been going to

We have been going to S & S for 12 years now. Oreo and Chewy have been treated so well there. Helen and staff have been through many issues with Chewy and always accommodate him. He became paralyzed 6 years ago and had spinal surgery and 3 years of physical therapy. He can walk now, but they have very kindly groomed him with all of his issues including wearing a male wrap, a cone on his head, bandaging on his foot they have to remove and replace each time. We are so thankful we have found such a great team of groomers and they always come out looking and smelling great. Thank you S & S!

Knowing Helen is to relax

Knowing Helen is to relax and enjoy the day your “child”goes to the groomer. Nobody in the world could ever come close. She is a warm, caring person. Moving to Tucson, Helen interviewed my new groomer to see if she was qualified. My highlight visit back in summer will be for Taylor and I to see her! Thanks again!

BEST GROOMING SALON AROUND! Helen and staff are AMAZING. They always take such good care of Canyon (my cocker spaniel) when she is there. Helen is very accommodating and treats my Canyie (and all the other animals) with so much love. Thank you Scissors and Suds staff!

Scissors & Suds is the

Scissors & Suds is the only place we will take our poodle to be groomed. He hates being brushed or groomed if it’s not at Scissors & Suds! We love Helen and the staff. The store is very neat. The cages the animals are kept in after grooming and clean and cozy. We feel like Smokey is safe when he is in their care. The grooming is amazing – I have never seen our pup look so good. Helen is so kind and welcoming, and she is always eager to give us tips on keeping his coat, nails and ears clean. We are so thankful to have Helen in our lives!

We took our mini-poodle, Truman,

We took our mini-poodle, Truman, to Helen and company for many years before we moved to the West Coast. They always did a wonderful job with him, quirky little guy that he is. When we moved, we tried to find another groomer, but no one has even come close to our friends at Scissors n Suds. We miss them!

My notoriously nervous, but lovable,

My notoriously nervous, but lovable, Yorkie-poo, LuLu, went to Scissors and Suds today for the first time, on recommendation from a family member. My notoriously nervous, but lovable self is more than pleased with the experience. Dog groomers are a hard business to rate, simply because it is not a direct experience. But, none the less, LuLu came home with a fantastic cut (she was pretty mangy going in) and she was in a way less nervous manner than when I left her. The owner and staff were personable and have an obvious love for furry friends of all temperaments and breeds. I super-duper, highly recommend Scissors and Suds.