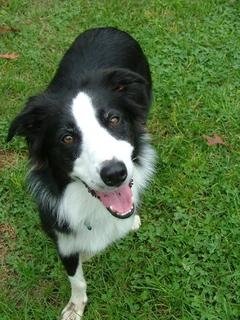 Posted on 7/10/2013 by Helen Rubino
Here is Part Two of yesterday’s Blog. This time on tips you SHOULD NOT do while walking your dog 🙂

In our previous installment, we covered what you should do when you’re walking your dog. In part two, we cover the things you shouldn’t do. Read Dog Walk Etiquette Part One, .

The walk is one of the most important activities you can share with your dog. It’s a time for both of you to bond, and for you to practice calm, assertive leadership.

However, it can be very easy to slip into doing the wrong thing. Here are five tips on what not to do when you’re walking your dog.

Don’t panic. Whether you realize it or not, you communicate your current energy and state of mind to your dog right through the leash, and the quickest way to put your dog in a state of alert is to tense up suddenly.

If you’re nervous, then your dog will sense it and react accordingly, by becoming anxious or protective, depending on the dog. Either state of mind can lead to aggression. Additionally, if you become fearful, that strange dog approaching can sense and react to it as well.

The worst possible combination would be two fearful owners approaching with dogs in an excited, alert state. This is the kind of interaction that can and does lead to dog’s fighting.

Don’t let your dogs approach others without asking: This applies to strange dogs and strange people — you won’t necessarily know whether their dogs are aggressive, or whether they’re afraid of dogs. You may have the friendliest dogs in the world, but that stranger walking toward you doesn’t know that, and you don’t know them or their dogs, either. This is where communication is again a dog walker’s friend.

Just as you should alert other people to anything your dog might do as they pass, it doesn’t hurt to ask about other people’s dogs with a polite, “Are they friendly?” or similar question. If the other walker’s dog has an issue, they’ll tell you, and you can both act appropriately.

Generally, people will tell you through their reaction how they feel about dogs. If they shy away as they approach, make sure that you’re between them and your dogs, and keep your dogs from approaching them, even if it’s just for a friendly sniff.

If a stranger approaches your dogs, it’s up to you to let them know whether it’s safe or advisable to do so. No one will be offended if you tell them, “My dog doesn’t like strangers.”

Don’t use a variable length lead: Retractable leads have a purpose, and it’s very specific. They were originally designed for certain types of tracking and recall training with dogs. If you don’t know what those are, then you have no reason to own or use a retractable lead. You should never use such a lead for just walking your dog.

There are three big issues with retractable leads, the first of which is safety. Since they can effectively allow your dog to run for twenty or more feet before the end of the line, they allow your dog to build up a lot of speed.

Remember “force equals mass times acceleration” from high school physics? Well, give even a small dog a twenty foot head start, and they can build up enough speed to pull you off your feet, break the lead, or yank the handle right out of your hand.

That last situation can be particularly disastrous, since the handle will then retract on the lead, and the sound and motion of that big hunk of plastic suddenly whizzing up from behind can make your dog think something is chasing it, inspiring it to run faster and farther.

There’s also that twenty feet of line between you and your dog, which can be nearly invisible under the right circumstances. Your dog can get tangled in it, or tangle you or another person in it. Even the website for a prominent manufacturer of retractable leads warns of multiple possible injuries, including cuts or burns from the line, falls, eye and facial injuries, and even broken bones or loss of fingers.

You wouldn’t let your dog run free in the middle of the street, but very long leads can allow exactly this to happen. Dogs on retractable leads can and have run into traffic and been killed by cars.

Beyond safety issues, retractable leads just teach your dog the wrong thing: That pulling on the lead will get them what they want — in this case, the freedom to run all over the place. When they stop pulling, the lead pulls back, so the desire to pull and run away is constantly reinforced.

Finally, retractable leads may be illegal in your area. For example, the leash law in the city of Los Angeles reads, “Every person owning or having charge, care, custody or control of any dog shall keep such dog exclusively upon his own premises provided, however, that such dog may be off such premises if it be under the control of a competent person and restrained by a substantial chain or leash not exceeding six feet in length [emphasis added].”

The same is true for leash laws in Los Angeles County, and may be similar in your jurisdiction. Aside from endangering a dog’s safety, many users of retractable leads may not even know that they’re breaking the law.

If the problem was your fault, acknowledge it and apologize. If it was the other party’s fault and they don’t offer an apology, don’t demand one. The best approach is to calmly walk away.

Don’t space out: The time you spend walking your dog should be a bonding experience for both of you, and learning to be in the moment like your dog is a useful skill that you can apply to other areas of your life.

The walk is not the time for you to catch up on email or texts, or to phone a friend, and you really don’t need that MP3 player plugged into your ears, either. If you walk with a friend or family member, it’s all right to have a conversation, provided you can multi-task and perform all the dos at the same time.

However, you’re the Pack Leader on the walk, or should be, and you can’t do that if your attention is focused elsewhere. It only takes an instant of inattention to wind up in an awkward or unsafe situation. You owe it to your dog to be aware and fully in the moment.

What are some situations you’ve run across on the walk where you or someone else did or did not follow these rules of Dog Walk Etiquette? Let us know in the comments.

previous
Dog Walk Etiquette: WHAT TO DO
next
LOOKING TO ADOPT A NEW DOG?